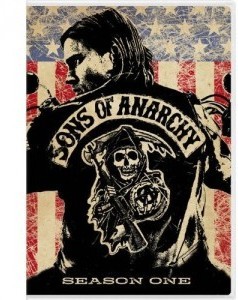 Los Angeles, CA – Fox is the owner of all copyrights in its “Sons of Anarchy” television show airing on FX. The dramatic television series follows a notorious outlaw motorcycle club battling outside threats to protect its livelihood “while ensuring that their simple, sheltered town of Charming, California remains exactly that – charming.” The complaint asserts that “Sons of Anarchy” is the most-watched scripted original series on cable television, surpassing the Emmy and Golden Globe award-winning series “Nip/Tuck” and “The Shield” with an average of 3.1 million weekly viewers. Not surprisingly, Fox sells show related merchandise and has a registered USPTO trademark for “Sons of Anarchy” and several pending applications.

Fox claims that in August of 2009 it discovered Defendants were selling clothing incorporating the Sons of Anarchy trademark and Grim Reaper design at the annual Sturgis Motorcycle Rally in South Dakota. In response to Fox’s cease and desist letter, Defendants claimed that the “shirts did not sell and it was a complete waste of my time.” In the spring of 2010 Fox discovered the same defendants allegedly selling infringing items through the www.supportsoa.com website. In response to another C & D letter, Defendants claimed that they had simply forgotten to take the site down and they had not sold any merchandise. Fox then asserts that a few months later it discovered that Defendants were attempting to sell infringing products to Fox’s potential distributors, including Harley-Davidson stores. Fox further alleges that Defendants have recently sold infringing products at their own physical stores. Fox was forced to sue for copyright and trademark infringement and unfair competition. The case is Twentieth Century Fox Film Corporation v. Renegade Classics, et al. CV10-8565 SVW (C.D. Cal. 2010).