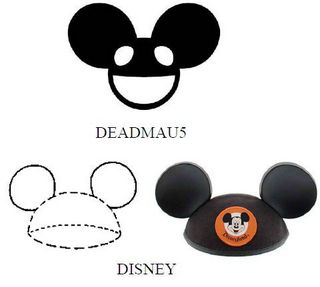 Disney’s trademark attorneys sought an extension of time at the U.S. Patent & Trademark Office’s Trademark Trial & Appeal Board while they review their options in legally challenging DJ Deadmau5’s application to register his mouse-head logo. Joel Zimmerman, better known by his Deadmau5 stage name, is a well-known music producer and DJ. For many years, the DJ has used his mouse-head logo on numerous album covers and also worn it as a headdress at his live performances and concerts.

The DJ filed a trademark application at the USPTO to register the mouse-head logo for use on a variety of goods and services including stereo turntables, DVDs featuring music, coffee, beer, clothing, entertainment services in the nature of performances by a musical artist, and even BMX bikes. After a trademark application is filed, if the examining attorney finds a lack of potential confusion with any previously registered or pending trademarks, the application is published for opposition for thirty days. During this opposition window, any person or company that believes it will be harmed by the registration may either file an opposition to the registration or seek an extension of time to oppose the registration. Disney has chosen the latter route while it evaluates its legal options in the next ninety days. Disney is the long time owner of the trademark in mouse ears depicted here, which are incorporated into the ubiquitous hats sold at Disney theme parks.