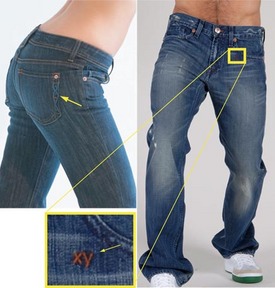 Los Angeles, CA – Project E previously filed (posted here) a trademark infringement lawsuit, at the Federal District Court in Los Angeles, against Genetic Denim over the use of the “XX” design stitched into jeans. Defendant Genetic Denim has countered with the filing of a third-party complaint (read here) against Michael D. Hecht, the owner of record of the USPTO registration of the “XX” trademark. Hecht allegedly licensed the “XX” trademark – on an exclusive basis – to Project E, the plaintiff in the action.

Genetic Denim quizzically asserts that Project E failed to allege the registered trademark in the initial complaint and contends the absence is based on the possible invalidity of the registration – i.e. “the mark was incapable of functioning as a trademark within the clothing industry as the XX cross-stitching was and is a common decorative element found on clothing.” Genetic Denim seeks cancellation of the trademark registration and monetary damages for unfair competition under the Lanham Act 43(a). The case is titled Project E, Inc. v. Genetic Denim, LLC, CV 08-04016 R (C.D. Cal. 2008).