Los Angeles, CA – North Hollywood based Air Dimensional Design, Inc. instituted a patent infringement, trademark infringement, and unfair competition lawsuit against several competitors for allegedly infringing on its promotional and marketing inflatable toy figures. Plaintiff is the assignee of U.S. Patent No. 6,186,857, which relates to an inflatable form, usually human, made from an ultra-light, thin fabric or sheet material that is sewn or otherwise formed into tubular sections that are connected together to form the full figure. The inflatable bendable figure is connected to an air blower that constantly blows air into the fabric. Holes in the head and arms of the figure and the dynamic air flow cause the figure to undulate like it’s dancing. Plaintiff has used the trademark “Fly Guy” on its promotional product and has registered it with the U.S. Patent & Trademark Office. 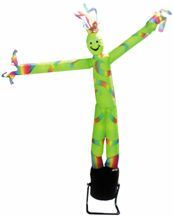 Plaintiff alleges that several defendants are infringing its patent by making, selling, and using undulating figure products embodying the patented invention. Plaintiff also states that defendants are infringing on its “Fly Guy” trademark by using the confusingly similar “Fly Guys” trademark. In addition, Plaintiff contends that the defendants are using its “Fly Guy” trademark as a Google adword to redirect consumers to defendants’ websites. The complaint asserts causes of action for infringement; federal trademark infringement of registered trademark (15 U.S.C. §§ 1114-1117; Lanham Act § 32); federal unfair competition (false designation of origin and false description (Lanham Act 43(a) and 15 U.S.C. 1125); trademark infringement under California law; California unfair competition under section 17200; and trademark dilution. Plaintiff alleges that the infringement is willful and intentional and requests that the damages be trebled. The case is titled Air Dimensional, Inc., v. Action Sky Dancers, CV08-01121 GW (C.D. California).