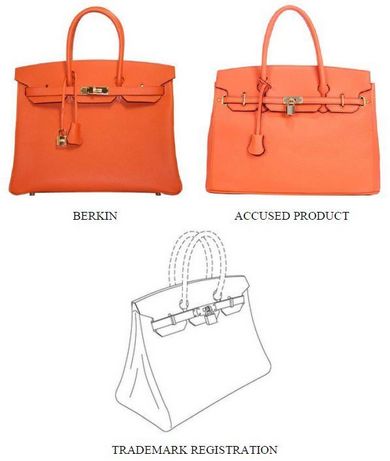 Hermès is a French luxury goods manufacturer whose handbags and purses are highly coveted. Its “Birkin” handbag has become immediately recognizable to millions of consumers (I know because seven out of seven ladies in our office immediately identified the pictured bag as a Birkin) and therefore distinctive, thereby its shape is a registered trademark with the U.S. Patent & Trademark Office. While Birkin Bags have been manufactured using various leather types and textures, its trade dress is defined by “(a) a distinctive three lobed flap design with keyhole shaped notches to fit around the base of the handle, (b) a dimpled triangular profile, (c) a closure which consists of two thin, horizontal straps designed to fit over the flap, with metal plates at their end that fit over a circular turn lock, (d) a padlock which fits through the center eye of the turn lock and (e), typically, a key fob affixed to a leather strap, one end of which is affixed to the bag by wrapping around the base of one end of the handle.” Because each handbag is handcrafted by artisans using the finest leather, prices start at about $6,000 and reach the price of a finely engineered sports car.

Despite the high price of the Birkin Bag, it is generally recognized by consumers due to considerable coverage by the press and its inclusion in story lines of several television shows, including HBO’s Sex and the City. Because of the enormous sales, extensive advertising and promotion, and media coverage, the Birkin Bag’s shape has acquired secondary meaning and developed into a famous trademark. Even the strap/turn and lock/padlock closure is independently famous and the subject of another U.S. trademark registration.

Defendants Emperia, Inc., Anne-Sophie, Inc. and Top’s Handbag, Inc. are accused of being related sister companies in the business of importing and distributing women’s handbags. Defendants are accused of selling infringing knockoff bags to Charming Charlie and JustFab. Despite allegedly receiving cease and desist letters, Defendants continued to expand and sell additional knockoff designs. The suit seeks unspecified damages, but requests that actual damages be trebled, pursuant to 15 U.S.C. § 1117, because defendants intentionally and willfully continued their infringement despite receiving notice of their infringing activity.

To see pictures of all the accused products, click here.

It appears that third-party knockoffs of the Birkin Bag are so prevalent that numerous Youtube videos have been posted to spot the alleged fakes: