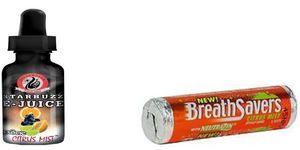 There’s no smoke, but a federal trademark lawsuit fire is burning between Starbuzz Tobacco and The Hershey Chocolate Company. The trademark lawsuit is in response to Hershey’s Trademark Trial & Appeal Board (“TTAB”) opposition to Starbuzz’s trademark application for Citrus Mist for use on e-cigarette flavored liquids. In the TTAB opposition, Hershey contends that Starbuzz’s Citrus Mist trademark is likely to cause consumer confusion with Hershey’s Citrus Mist® trademark registration covering breath mints and candy. Hershey alleges that “consumers are highly likely to associate [Starbuzz’s] chemical flavorings with the flavors of Hershey’s CITRUS MIST brand candy and mints, and make purchasing decisions based on that association.”

Starbuzz’s lawsuit seeks the court’s determination that its Citrus Mist trademark for e-cig flavoring does not infringe or dilute Hershey’s similar trademark. Starbuzz is already the owner of a federally registered Citrus Mist® trademark for pipe tobacco and flavored tobacco, which it has been using since 2008. Starbuzz reasons that the absence of any instances of actual confusion over the last six years between the parties’ respective Citrus Mist trademarks supports its conclusion that expansion into the related e-liquid market for e-cigarettes would not result in confusion and, thereby, infringement. Additionally, Starbuzz argues that labels of the respective products are “completely different” and easily allow consumers to differentiate between the two products and would not lead to confusion.

Regarding the dilution claim, Hershey would have to show that its Citrus Mist trademark was famous before Starbuzz’s adoption of its Citrus Mist trademark. Thane Int’l, Inc. v. Trek Bicycle Corp., 305 F.3d 894, 911 (9th Cir. 2002) (holding that dilution protection extends only to those whose mark is a – nationally recognize household name); Nissan Motor Co. v. Nissan Computer Corp., 378 F.3d 1002, 1014 (9th Cir. 2004) (ruling that survey evidence of sixty-five percent of the attitude of people who intended to purchase a new car recognized the NISSAN trademark coupled with promotional expenditures of $898 million during the period 1985–91 were not conclusive to support – as a matter of law – at summary judgment that the NISSAN trademark was famous as of 1991). Starbuzz contends Hershey’s Citrus Mist trademark is not widely recognized by the general consuming public, which in comparison to Hershey’s Kisses® trademark, I would have to agree.