The Trademark Trial And Appeal Board (“TTAB”) issued a ruling in In re Right-On Co., Ltd., affirming the examining attorney’s refusal to register Right-On’s three trademark applications, covering stitching on the back pockets of jeans, because they were a form of ornamentation and were not inherently distinctive to function as trademarks. Click HERE To Read The Opinion. 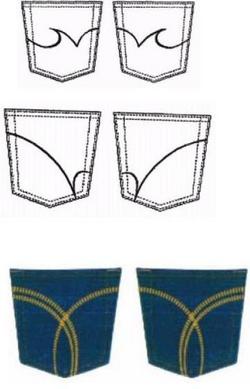 Right-On filed applications to register as trademarks on the Principal Register the pocket-stitching designs shown to the right for various apparel and garment goods. The focus of the appeal to the TTAB was restricted to jeans only. All three applications were based on a request for extension of protection under Section 66(a) of the Trademark Act, 15 U.S.C. §1141f(a) or, in other words, extension to the United States was sought from an international registration. The Examining Attorney refused registration of the pocket-stitching designs because they are “decorative or [] ornamental feature[s] of the goods that are not inherently distinctive and thus would not be perceived as [] mark[s] by the purchasing public without further evidence of acquired distinctiveness.” The applicant, surprisingly, “elected not to attempt a claim of acquired distinctiveness under section 2(f)” but instead appealed the final refusal to the TTAB.

In considering the facts of the instant applications and the designs, the TTAB judges ruled that “Applicant’s argument that its designs are not common is not supported by the record. There are a multitude of variations of arches, checks, swoops, waves and other linear designs registered or in use on jeans pockets. They are in no way ‘elaborate and unique.'” The TTAB, however, did indicate that the applicant may have been able to register it’s stitching trademark based upon acquired distinctiveness, which it chose not to do.

PRACTICE NOTE: If you intend to use pocket-stitching on jeans as a trademark, it is highly unlikely that adopting geometric shapes and lines will qualify as an inherently distinctive trademark. Thus, it is better to use elaborate and unique designs that are inherently distinctive and entitled to immediate registration, which designs may also be protectable through copyright registration. I previously posted here about a jean pocket-stitching design which was both copyrighted and a registered trademark.