Luxury-goods maker Louis Vuitton sued Haute Diggity Dog, a small company, for trademark, trade dress and copyright infringement for selling “Chewy Vuiton” dog chew toys and beds. The trial court determined that Louis Vuitton’s trademark litigation stance had more bark than bite and ruled in Haute Diggity’s favor. “The fact that the real Vuitton name, [trademarks and trade dress] are strong and recognizable makes it unlikely that a parody – particularly one involving a pet chew toy and bed – will be confused with the real product,” stated the court, while addressing the likelihood of confusion factors. 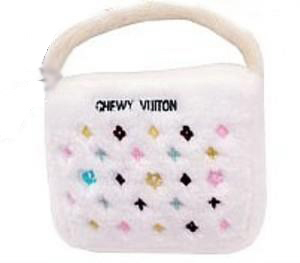 As an amusing side-note, the company also spoofs other well known trademarks by selling products under the “Dog Perignon,” “Bark Jacobs,” “Chewnel # 5,” and “Sniffany & Co.” trademarks.

Louis Vuitton doggedly appealed the decision and the appellate court recently agreed with the trial court that Haute Diggity’s dog toys were a successful parody of the Louis Vuitton’s trademark, trade dress and copyright. The Fourth Circuit Court of Appeals stated:

We conclude that the [parody] criteria are amply satisfied in this case and that the “Chewy Vuiton” dog toys convey “just enough of the original design to allow the consumer to appreciate the point of parody, but stop well short of appropriating the entire marks that LVM claims.

The appeals court also examined the likelihood of confusion factors, and found that most of the factors favored the appellee:

In sum, the likelihood-of-confusion factors substantially favor Haute Diggity Dog. But consideration of these factors is only a proxy for the ultimate statutory test of whether Haute Diggity Dog’s marketing, sale, and distribution of “Chewy Vuiton” dog toys is likely to cause confusion. Recognizing that “Chewy Vuiton” is an obvious parody and applying the [likelihood of confusion] factors, we conclude that LVM has failed to demonstrate any likelihood of confusion. Accordingly, we affirm the district court’s grant of summary judgment in favor of Haute Diggity Dog on the issue of trademark infringement.

The appellate court also swiftly disposed of Louis Vuitton’s claims of counterfeiting, trade dress and copyright infringement because Haute Diggity’s products were not knock-offs, the trade dress issues were similar to the trademark issues, and the copyright claim was a disguised trademark and trade dress claim.

PRACTICE NOTE: Parody defenses are a costly risk and a play on famous trademarks should generally be avoided. For example, Haute Diggity reportedly incurred approximately $300,000.00 in legal fees and spent years in court. A carefully selected trademark will keep you out of litigation and allow you to use your financial resources to further your business goals. For suggestions in selecting an appropriate trademark, please CLICK HERE to read our article.