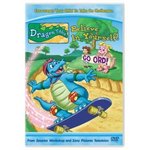 Los Angeles, CA – Jose-Luis Orozco is accusing Sesame Workshop of using his copyrighted song in its Dragon Tales television program without authorization. According to the complaint, Orozco wrote the music and lyrics to the children’s song El Chocolate in 1971, which was based on his travels and experience to Sonora, Mexico in 1958. In 1981, Orozco recorded the song on an album, which song was also included in the companion song book. The song was not copyrighted, however, until 1996.

Orozco alleges that his El Chocolate song was performed in the “Super Snowy Day” episode of Dragon Tales. Orozco also claims that the song was also included on a Dragon Tales DVD. The song is very catchy, so don’t click play below if you don’t want an earworm.

PRACTICE NOTE: I cannot emphasize the importance of registering copyrights within the first five years from the initial date of publication. Under 17 U.S.C. § 410(c), a copyright registration obtained within five years of first publication serves as prima facie evidence of the validity of the copyright and of the facts stated therein.