Los Angeles, CA – Copyright attorneys for Illume Candles, Inc. filed a copyright declaratory relief of no infringement lawsuit, under 28 U.S.C. § 2201, in Federal District Court in Los Angeles, seeking declaratory judgment of non-infringement on Angela Adams Licensing, LLC’s copyrighted work. On March 31, 2008, Angela Adams’ attorneys sent a letter to Illume accusing copyright infringement of two copyrighted works registered with the U.S. Copyright Office. The accused infringing products are three of Illume’s candle packaging that have a link and chain graphic design. Illume denied that its packaging infringes on Angela Adams’ copyrighted works because it was independently developed and “the accused works lacked the requisite degree of similarity to the registered works to establish a claim of copyright infringement.” Angela Adams was dissatisfied with Illume’s response and enclosed a recent court decision that was favorable to Adams, which led Illume to believe that Adams would enforce its copyrights against Illume. As such, an actual controversy existed between the parties and Illume seeks a declaratory judgment of non-infringement of the copyrights. 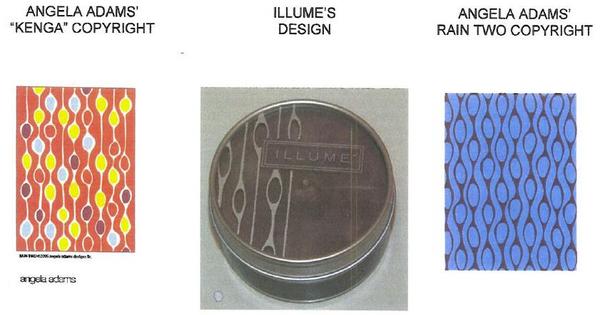