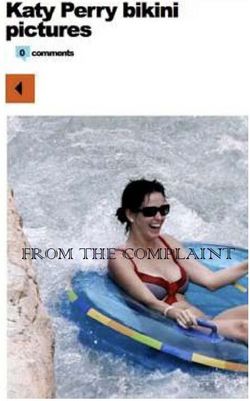 Mavrix Photo is a celebrity photography agency that licenses the pictures to magazines and celebrity gossip websites. Mavrix alleges that it has licensed individual images of celebrities for over $100,000 to major content outlets. Mavrix is accusing the popular men’s website, Guyism.com, of infringing at least 21 copyright registrations for Katy Perry bikini pictures by posting them on its website. An exemplary picture taken from the complaint is shown to the right. “Defendants herein have driven massive traffic to Guyism.com-including millions of visitors monthly across the United States and California-in part due to the presence of the sought after and searched-for celebrity images that frame this dispute. All of this traffic translates into significant ill-gotten commercial advantage and revenue generation for Defendants as a direct consequence of their infringing actions.”

Mavrix is seeking statutory damage of $3,150,000 for the 21 images. In order to qualify for statutory damages under 17 U.S.C. §412, a plaintiff must show that the pictures were registered within three months from the date of first publication or that the registration occurred before the infringement began. Here, the Katy Perry photographs were taken in the Bahamas on July 18, 2010 and registered by September 7. Section 504(c) of the Copyright Act provides for damages of up to $150,000 per work wherein the infringement is shown to be willful. Here, Mavrix alleges that despite Guyism’s “economic resources and sophistication on intellectual property matters, Defendants have, on information and belief, violated federal law by willfully infringing Mavrix copyrights to at least 21 different photographs on Guyism.com.” In other words, Guyism is sophisticated enough to know that it willfully infringed Mavrix’s copyrights by posting the Katy Perry photos on its website. I was able to do the math – calculator unaided – and 21 multiplied by $150,000 does, in fact, equal plaintiff’s demand.