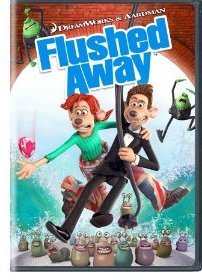 Los Angeles, CA – Yolanda Buggs accused Dreamworks’ animated movie “Flushed Away” of infringing her copyrighted screen play “Critter Island.” Details blogged here. On summary judgment, the Court applied only the “extrinsic test,” an objective comparison of specific expressive elements, because the “intrinsic test” is within the province of the jury. The Court examined the protectable, specific expressive elements, focusing “on articulable similarities between the plot, themes, dialogue, mood, setting, pace, character and sequence of events in two works.”

The Court found that “the basic plot idea of pests with human attributes getting flushed and saving their communities is not protectable…Plaintiff must show similarities of expressions in more specific details rather than allege similarities of general plot ideas.” The Court also found that the male characters in the two works were substantially different, for example, “Roddy in ‘Flushed Away’ is an adult, dapper, clever, cautious, and lonely British rat living as a pet in the Kensington neighborhood of London. Roddy ultimately chooses to live with Rita in the sewer rather than to have a lonesome life of luxury above ground. In contrast, Mario in ‘Critter Island’ is an adolescent. He is not a loner, but rather, a leader of the Water Bugs, a son, and a prominent young member of the cockroach community at the retirement home.” The female characters, villains, and other characters were also found to be dissimilar.

The Court further found the themes were different, wherein Critter Island’s focus on racism and the importance of unity based on different species of cockroaches was absent in “Flushed Away.”

As to settings, pace, and mood, the Court determined that, apart from generalities, the Plaintiff was unable to point to any detailed indicia of substantial similarity between the two works. The dialogue and sequence of events were also found to be dissimilar.

Plaintiff relied on the “inverse ratio” rule, which lessens the level of proof required to show copying when the plaintiff can show that the defendant had a “high degree of access” to the protected work. “Even assuming, arguendo, that Defendants had a high degree of access to Plaintiff’s work, the inverse ratio rule does not aid Plaintiff because ‘[n]o amount of proof of access will suffice to show copying if there are no similarities’ between the protected expressions in the two works.” Thus, the Court granted summary judgment of non-infringement.