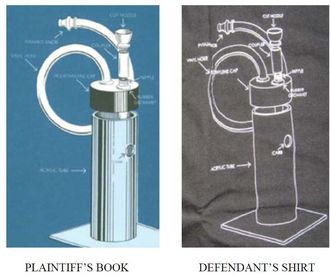 Los Angeles, CA – In yet another case that should have settled quickly (see here), Defendant Upper Playground – who admitted to unabashedly copying the illustrations from Plaintiff’s book – instead attempted to challenge the validity of the copyright registrations. Randy Stratton authored and illustrated the book “Build This Bong: Instructions and Diagrams for 40 Bongs, Pipes and Hookahs”, and obtained separate copyright registrations for the book itself and the underlying illustrations. (Details here.) The Court granted summary judgment finding that Upper Playground willfully infringed the copyrights by providing the book to its T-shirt designer with instructions to copy the illustrations.

The Court then quickly dispensed with Defendant’s perplexing copyright invalidity arguments. Defendant first argued that the illustrations lacked originality because the “diagrams demonstrate various ways to construct a common smoking device without adding anything original to the construction of a bong.” The Court found Defendant’s argument “unavailing as it seemingly conflates copyright protection with patent protection…Originality, as the term is used in copyright, means only that the work was independently created by the author (as opposed to copied from other works), and that it possesses at least some minimal degree of creativity…It is only the work that need be original, not necessarily the subject of the work.”

Defendant’s second argument disappeared like a puff of smoke, created by use for medicinal purposes only. Defendant’s argued that because a bong is a “useful article”, illustrations thereof are not protected by copyright law. Defendants’ argument, if accepted, would have eviscerated the fashion photography industry because pictures of clothing – defined by the Copyright Act as useful articles – would not be copyrightable. The Court rejected the argument because “even assuming that a bong is a ‘useful article’ (which likely depends on who one asks), Plaintiff’s illustrations are nothing but drawn portrayals of that ‘useful article,’ lacking ‘intrinsic utilitarian function[s]’ of their own.”

Defendant finally argued that the illustrations show “a method or procedure for assembling bongs” which cannot be copyrighted because “copyright protection does not extend to any ‘idea, procedure, process, system, method of operation, concept, principle, or discovery, regardless of the form in which it is described, explained, illustrated, or embodied.'” The Court rejected Defendants’ misapprehension of the law by providing the following example: “the process of making wine by crushing grapes is not entitled to copyright protection, but a painting of a person excitedly jumping up and down, barefoot, in a wooden barrel, located in the middle of a vineyard, under the Tuscan sun is.” Applied to the case at hand, the Court found that “Plaintiff did not seek and receive copyright protection for the process of making a bong. Nor is he entitled to sue those people who follow the recommendations in the book and build the bongs depicted. What Plaintiff is entitled to, however, is to seek legal remedies from those people who reproduce, verbatim, the original illustrations he created depicting those bongs. The concept of a bong and the process followed in making a bong are outside the reach of copyright law, but the artistic expression of the concept and process are not. Plaintiff sought protection for the latter, not the former.”