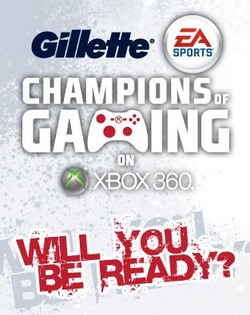 San Diego, CA – Ron Voss is suing Gillette and EA Sports for copyright infringement and unfair competition, but judging from the facts of the case, he should have asserted an idea submission or an implied in fact contract claim. People mistakenly believe that a copyright registration protects the “idea” contained therein, instead of the particular expression. In fact, §102 of the Copyright Act specifically states that copyright protection does not extend to any “idea, procedure, process, system, method of operation, concept, principle, or discovery, regardless of the form in which it is described, explained, illustrated, or embodied in such work.”

Voss alleges that he wrote and copyrighted a treatment entitled “Cyber Sports Championship Challenge,” which concept involves televising video game tournaments that pit gamers against celebrities and famous sports stars as contestants. Voss contends that co-defendant Jerry Knotts “misappropriated [the copyrighted work] and delivered it to EA. Afterward, EA and other defendants infringed Mr. Voss’ copyright by creating and distributing on commercial television (via the Spike Channel) and the World Wide Web “Gillette®-EA Sports™ Present Champions of Gaming powered by Xbox 360 LIVE” (the “program”).” The complaint, however, fails to specify how the expression of the copyrighted work was copied, separate and apart from the alleged “misappropriation” of the general idea. Plaintiff’s §17200 unfair competition claim is based on the copyright infringement facts and is preempted. Fractional Villas, Inc. v. Tahoe Clubhouse, 2009 U.S. Dist. Lexis 39522 (S.D. Cal. 2009)(dismissing § 17200 claim because it was preempted by the Copyright Act).

The 9th Circuit has yet to rule after the en banc rehearing of the “Ghost Hunters” case, Montz v. Pilgrim Films & Television, Inc. The three-judge panel affirmed the district court’s order that Montz’s implied in fact contract claim was preempted by the Copyright Act. Montz v. Pilgrim Films & Television, Inc., 606 F.3d 1153 (9th Cir. 2010) (non-citable). The Court sua sponte ordered an en banc rehearing of the case and withdrew the three-judge panel’s published opinion. Based on the en banc panel’s questioning, I – as a non-clairvoyant – predict a reversal of the district court’s ruling and a finding that Montz’s idea submission claim is not preempted by the Copyright Act, in line with Grosso v. Miramax Film Corp., 383 F.3d 965 (9th Cir.2004) and Desny v. Wilder, 46 Cal.2d 715, 299 P.2d 257 (1956). Watch the video of the Ninth Circuit’s en banc rehearing: