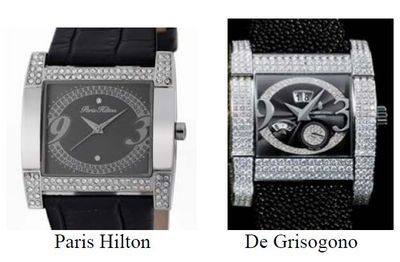 Since she blew onto the scene and gained notoriety from her 2004 sex tape, Paris Hilton has become a trademark licensing phenomenon, lending her name to a wide range of products, from shoes to perfumes. Her latest watch design, however, may not be as successful after being sued for patent infringement. Fine jewelry and watch designer de Grisogono has manufactured and sold the Novantatre watch since 2007. The term “Novantatre” is Italian for “93”, referring to the prominently displayed “9” and “3” on the watch’s face.

To protect the watch’s design, Plaintiff applied for and was granted U.S. Patent Nos. D596,052 (“the ‘052 patent”) and D627,673 (“the ‘673 patent”). The ‘052 patent covers the square-shaped casing design of the watch and the ‘673 patent relates to the ornamental design of the watch dial, including the positioning of the “9” and the “3”. Plaintiff is accusing the Paris Hilton-branded “Coussin” wristwatch of copying the same protected design elements covered by the two patents.

Plaintiff alleges that it sent multiple cease and desist letters to the defendants, which were ignored. Thus, Plaintiff contends that the infringement is willful and intentional and is requesting not only for disgorgement of Defendants’ profits under 35 U.S.C. § 289, but also for the court to triple the award under 35 U.S.C. § 284.

In addition to suing Paris Hilton Entertainment, Plaintiff is also suing the manufacturer Parlux as the exclusive licensee of the Paris Hilton trademark used on the watch, and Crossbow International and Mr. Pascal Savoy because they have possession and/or control of the Paris Hilton websites where the watches are sold.

The 9th Circuit’s recent Louis Vuitton v. Akanoc Solutions ruling affirmed a web host’s liability for failing to close down websites that were selling counterfeit goods. A jury trial resulted in a $32.4 million award, where the web hosts were jointly liable with the web site operators selling counterfeit goods that infringed Louis Vuitton’s trademarks and copyrights. The trial court then reduced the damages award by approximately $10 million. The 9th Circuit agreed that the web host was jointly liable, but further reduced the damages award because the verdict form improperly allowed multiple awards of statutory damages for willful copyright and trademark infringement against each infringer. “[W]hen statutory damages are assessed against one defendant or a group of defendants held to be jointly and severally liable, each work infringed may form the basis of only one award, regardless of the number of separate infringements of that work.” Columbia Pictures Television v. Krypton Broad. of Birmingham, Inc., 106 F.3d 284, 294 (9th Cir. 1997), rev’d on other grounds, Feltner v. Columbia Pictures Television, Inc., 523 U.S. 340 (1998)). Thus, the 9th Circuit vacated the damages award and ordered an award of approximately $10.8 million jointly and severally against all of the defendants.