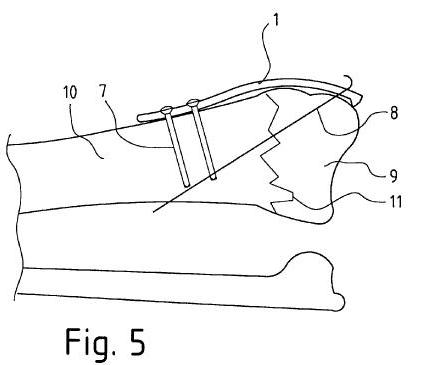 TriMed appealed and the Federal Circuit Court of Appeals (“CAFC”) held that the claim at issue of U.S. Patent No. 5,931,839 “recites sufficient structure on its face for performing the claimed functions, and therefore, contrary to the district court’s interpretation, does not involve a means-plus-function limitation.” In holding that the lower court had erred in its claim construction and order of non-infringement, the Federal Circuit stated:

Stryker’s motion for summary judgment of noninfringement was premised solely upon reading the claim language at issue as a means-plus-function limitation. Having properly construed the relevant claim language as falling outside the ambit of § 112 ¶ 6, we hold that Stryker has failed to demonstrate that there is no genuine issue of material fact that its accused devices do not infringe on the ‘839 patent. By Stryker’s own admission, the structural limitation of holes in claim 1 is certainly present in its accused devices.

PRACTICE NOTE: When drafting patent claims in a patent application, particular attention must be paid to the term “means” and whether it is intended to serve as a “means plus function” limitation. If uncertainty exists, the prudent path is to eliminate the term “means” from the claim language.