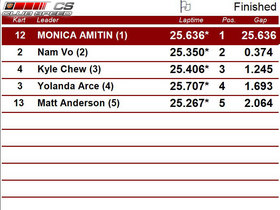 Oskar Systems sued Club Speed, Pole Position, P2R Karting, and individuals for allegedly infringing its copyright in source code for a computer program used in the operation of go-kart tracks. Details blogged here. In late 2001-early 2002, the software was initially developed and owned by Contemporary Systems, Inc. (“CSI”). In 2005, Defendants licensed the software from CSI for one year but then developed their own replacement software and did not renew the license. Oskar Systems is formed in December of 2006 and in October of 2007, CSI transfers “all of its business assets related to ‘Oskar’ business operations” to Oskar Systems. In February of 2009, seven years after the date of creation, Oskar Systems first registers a claim of copyright with the copyright office, but the source code submitted to the Copyright Office was the 2008 version – not the 2002 version.

The Court first found that Oskar Systems did not have standing to bring suit because the alleged infringement occurred before the CSI assets were assigned to Oskar and the assignment did not expressly include causes of action for infringement. “A grant of copyright, even if it purports to convey ‘all right, title and interest,’ is generally construed not to assign existing causes of action unless such causes of action are expressly included in the grant.” Lanard Toys Ltd. v. Novelty Inc., 511 F. Supp. 2d 1020, 1033 (C.D. Cal. 2007). A copy of the order is available here.

Additionally, the Court found that Oskar Systems lacked standing because it failed to deposit with the Copyright Office two copies of the original 2002 software, but instead submitted the software as it existed in the latter part of 2008. The day before filing its opposition, Oskar System attempted – fruitlessly – to correct the improper deposit by filing a supplemental registration and disclosing that the 2008 version is a derivative work of the 2002 software.

Also, the Court found that Plaintiff did not fall within the exception permitting deposit of a derivative material to suffice to register the original work upon which the derivative is based because the alleged infringement occurred before the deposited version of the work was even created.

Further, the Court found that Plaintiff’s supplemental copyright registration fails to register the 2002 version of the software because it failed to sufficiently identify the original work from which the subsequent work was derived. Plaintiff’s statement that “[t]his particular work is actually a derivative work of prior versions of the same computer program and therefore, the actual date of completion for this particular version is 2008, with a publication date of October, 2008” was an insufficient identification. Oskar Systems, LLC v. Club Speed, Inc. et al., CV09-03854 AHM (C.D. Cal. 2009).

PRACTICE NOTE: This loss might have been avoided if the work was timely registered with the U.S. Copyright Office. In order to recover statutory damages and attorneys’ fees from infringers, the work must have been registered with the U.S. Copyright Office before the commencement of the infringement or within three months from the date of publication. 17 U.S.C. § 412.