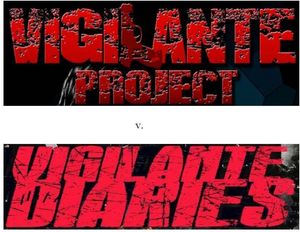 Writers and artists Christopher Dickens and Philip Morgenthaler are suing Chill, Inc. for copyright and trademark infringement over release of Chill’s “Vigilante Diaries” web based live action show. Plaintiffs claim they created a dark, graphic comic book story and distinct character titled “Vigilante Project,” wherein the protagonist is a young African American male named Alvin Gentry. No, not the basketball coach Alvin Gentry. This Gentry wears a hoodie and a skull mask covering the lower half of his face and camouflage attire with a sleeveless black undershirt along with fingerless gloves and military gear. Plaintiffs claim to have created a unique alternative to the classic superhero characters of conventional comic books because Gentry lacks any superhuman or preternatural powers.

Plaintiffs also contend that they have used a distinctive trademark as the title of the published comic books and t-shirts where the trademark is “denoted in bold, red letters that have a particular stylized look and feel, specifically all caps, red letters that have a distressed, worn and shredded appearance.” Plaintiffs have also described the character and the Vigilante Project, both through crowd-funding efforts and at comic book conventions, with the tagline “no cape, now cowl, now web, no problem.”

Chill is alleged to be funded by the venture capitalist firm of Kleiner Perkins and William Morris Endeavor talent agency, among others, and claims to be “the web’s premier video distribution platform for entertainment content direct from filmmakers, artists, and comedians.” Variety covered Chill’s crowd-funding approach to producing new episodes, where fans would pay to have the series continue production.

Plaintiffs claim that Chill’s vigilante character is also “a young African American man in a hoodie who wears a skull mask over the lower half of his face and dons a black sleeveless t-shirt and fingerless gloves and military gear to carry his weapons, all in a manner that is substantially similar to Plaintiffs’ Vigilante Character herein.” Also, in contradistinction to traditional superheroes, Defendants use a similar tagline of “no capes, no masks, no superpowers.” Further, Defendant’s “Vigilante Diaries” allegedly uses the same red stylized look and feel lettering as Plaintiff’s trademark.

As a result, Plaintiffs contend that “Defendants have therefore willfully infringed, and unless enjoined, will continue to infringe Plaintiffs’ copyrights by knowingly reproducing, displaying, distributing and utilizing for purposes of trade and promotion unauthorized derivative versions of the copyrighted works of Plaintiffs and the copyrighted elements therein.” Further, Plaintiffs allege that Defendants’ use of the confusingly similar Vigilante trademark, which includes the same stylized lettering look and feel, and even color, in addition to the use of a similar “no capes, no masks, no superpowers” slogan, has resulted in instances of actual confusion among consumers. Plaintiffs seek treble damages, attorneys’ fees, and costs for the alleged intentional trademark infringement claim.