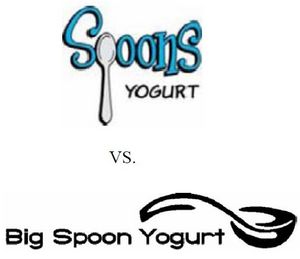 The USPTO Trademark Attorney refused Davide Mebane’s intent-to-use trademark application to register the Spoons Yogurt design mark on the Principal Register for “frozen yogurt” based on the likelihood of confusion with the previously registered Big Spoon Yogurt design trademark for “retail frozen dessert store services featuring frozen yogurt” under 15 U.S.C. §1052(d). In any likelihood of confusion analysis, the Board considers the du Pont factors of (1) the similarity/dissimilarity of the trademarks, and (2) the similarities of the goods to be key. In re E. I. du Pont de Nemours & Co., 476 F.2d 1357, 177 USPQ 563 (CCPA 1973). Unfortunately for Applicant, he only discussed the similarity of the marks in his brief.

In considering the similarity of Applicant’s mark and the registered mark, the Board noted that it “has been consistently held that similarity in any one of the elements of sound, appearance or meaning is sufficient to support a finding of likelihood of confusion.” Thus, although the Board agreed with the Applicant that “Big Spoon” dominates in the registered trademark and the word portion – as opposed to the design – will leave more of an impression in the consumers mind, it disagreed that the term “spoon” is weak because of widespread use.

The board examined twenty-two live registrations that included the term “spoon” cited by the Applicant and deemed many to be part of a phrase without any evidence of actual use. As a result, the “third-party registrations have little probative value because they are not evidence that the marks are in use on a commercial scale or that the public has become familiar with them.” The Board also gave a cold shoulder to the webpages Applicant submitted to show third-party use of “spoon” for similar services because they were too few in number and had a different commercial impression than that of registrant’s mark. Further, due to the shared term “spoon” in both design marks that consumers will not simultaneously encounter, the Board found that “while the marks differ in appearance, the marks are similar in sound, connotation and commercial impression; these similarities outweigh the dissimilarity in appearance.”

As to the second factor, the Board quickly dispensed a finding that the nature of the goods and services are related partly based on Applicant’s own admission. And the Board thus affirmed the Section 2(d) refusal to register the mark.