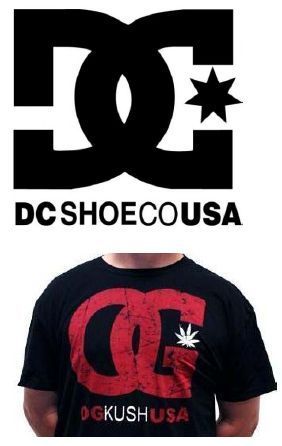 Santa Ana, CA – Apparel and footwear manufacturer DC Shoes, Inc. owns several USPTO registered trademarks for DC Shoes logos and DCSHOECOUSA. DC Shoes contends that through its widespread use and advertisements of its products, the marks have become famous. Owning trademarks, however, doesn’t mean you should always sue purported infringers that have a valid parody defense that can possibly invite public backlash.

DC Shoes accuses IQ 185 of operating an online store – www.notforpot.com – that sells marijuana-related apparel and accessories, including T-shirts and hats bearing allegedly infringing trademarks. The accused logos, pictured here, “include the interlocking letters ‘O’ and ‘G’ and a [marijuana] leaf, and ‘OGKUSHUSA’.” (Definition of kush, here.) Plaintiff claims that it sent a cease and desist letter to Defendant regarding the allegedly infringing products, but Defendant ignored DC Shoes’ demand. So DC thought it would be a good idea to file a lawsuit for trademark infringement, dilution, and unfair competition to attract more attention to Defendant’s sale of products that are protected by the First Amendment and the parody defense.

Two recent cases illustrate that a parody defense can be successfully used and sometimes provide the defendants with more positive publicity than the plaintiff imagined. In Louis Vuitton v. Haute Diggity Dog the appellate court sided with a parody pet product maker that used clever names such as Chewy Vuiton, Bark Jacobs, Sniffany & Co., and Dog Perignon. In another David v. Goliath battle, The North Face unwisely sued a high school kid for selling garments under the witty South Butt trademark. Not content with harassing a kid with a trademark lawsuit, The North Face wanted further bad publicity by overzealously attacking him and his father during depositions. In the end, however, the South Butt case settled and the kid was allowed to continue selling his T-shirts, but not without providing an amusing response to the complaint.

At the heart of every trademark case is consumer confusion, i.e. no confusion = no infringement. Does DC Shoes seriously believe that consumers purchasing weed parody T-shirts from defendant’s website are likely to be confused that they’re purchasing DC Shoes products? The case is DC Shoes, Inc. v. IQ 185 Apparel, SACV11-00721 AG (C.D. Cal. 2011).