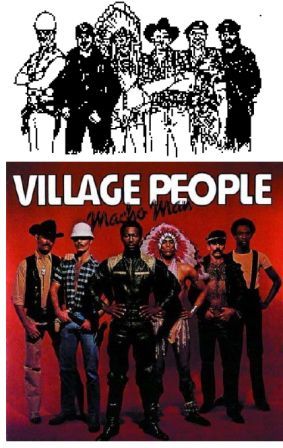 The wife and manager of Victor Willis, a former member of the disco group the Village People (yes, you read “wife” correctly, the Village People had at least one straight “macho man”), filed three petitions for cancellation of Can’t Stop Productions, Inc.’s (“CSP”) three trademark registrations, two for the word mark VILLAGE PEOPLE and one for the design mark shown to the right. CSP filed motions for summary judgment on Willis’ pleaded grounds of fraud, abandonment and genericness in each of the three cancellation proceedings, which the Trademark Trial & Appeal Board (“TTAB”) consolidate in its order because of the sufficient commonality of the factual and legal issues.

CSP had the initial burden to show with sufficient evidence, if unopposed, that there is no genuine dispute of material fact on the fraud, abandonment and genericness cancellation claims. The burden would then shift to Willis to show that there are material facts in dispute to be resolved at trial. The TTAB summarized Willis’ abandonment claims:

Petitioner makes similar allegations regarding abandonment of all three of the registered marks, namely that since the 1980’s the marks have only been licensed for live performances and no new recordings have been made since 1985; that the mark is for a “concept group,” not a musical group; and that changes have been made to the design mark because of changes to certain of the characters depicted in the mark. Petitioner alleges that these changes amount to abandonment of all three marks without an intent to resume use.

Under the Trademark Act, a prima facie case of abandonment is made if a trademark has not been used, without intent to resume, in the U.S. for a period of three consecutive years. 15 U.S.C. § 1127. As the moving party to dismiss the claims of abandonment, CSP provided the declarations of its managing director and of its licensee with evidence of continuous use of its marks for all of the goods and services listed in the registrations. In response, Willis presented evidence that CSP has made no new recordings since the 1980’s, when the songwriter Willis left the band. Therefore, the TTAB found that there was at least a genuine dispute of material fact as to whether the mark is being used in “connection with pre-recorded phonograph records, audio cassettes and audio tapes featuring music and vocals.” Nope, CDs and MP3s don’t count. Thus, summary judgment was denied in Cancellation No. 92051212, but granted as to the other two on the abandonment issue.

Willis argued that the term “village people” is generic because it describes groups of people living in a community or small town. The Board held that the argument cannot apply to the design mark because the words “Village People” do not appear in the mark. As to the word marks, the Board granted summary judgment because Willis “has not, and apparently cannot, raise any genuine dispute of material fact with regard to this ground as [Willis] has submitted no evidence, nor even made allegations, to show that the term VILLAGE PEOPLE is used as a generic term for musical recordings or performances” as opposed to identifying people who live in a village.

The Board also dismissed Willis’ fraud claims, but allowed thirty days to amend the claim of non-use and/or fraud in Cancellation No. 92051212 only, which concerns the phonograph records and audio cassettes.