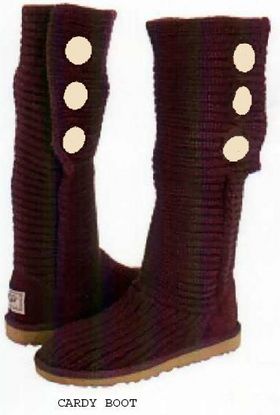 Los Angeles, CA – UGG® boot manufacturer, Deckers Outdoor, filed a patent infringement and unfair competition lawsuit against Claire’s Stores and CBI Distributing. UGG® boots have set a fashion trend with young ladies wearing the lamb-skinned boots – to keep their feet and calves warm – with shorts, thereby allowing their knees and thighs to freeze. That’s not in the complaint, it’s just a personal observation. Now back to the regularly scheduled complaint: the UGG® line of boots includes the Classic Cardy™, which was introduced in 2007 and has a crochet upper with buttons on the lateral side. The Classic Cardy™ boot is the subject of U.S. Design Patent No. D582,650 (“the ‘650 Patent”).

It’s unclear from the complaint whether Plaintiff is asserting a trade dress infringement claim, but at least they obtained a design patent for the boot – which is not a work protectable by copyright. By doing so, they avoid some costs and expenses in having to conduct surveys to establish trade dress rights and, further, a likelihood of confusion among consumers. The following Federal Circuit opinion provides a great comparison of the level of proof needed for each: