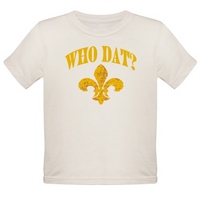 During Super Bowl week, the NFL is usually busy cracking down on church congregations showing the game in violation of the league’s copyrights. After not caring about the New Orleans Saints for over the last forty years (aka, the “Ain’ts” years), the NFL thought it would be a good public relations boost to send numerous cease and desist letters to merchants that were selling “Who Dat?” t-shirts and memorabilia. Who Dat? Who Dat trying to jump on Da Who Dat bandwagon?

After local merchants complained, it became an issue ripe for Congress. Louisiana Senator David Vitter wrote the NFL Commissioner urging him to “drop this obnoxious and legally unsustainable position and instead agree that ‘Who Dat’ is in the public domain, giving no one exclusive trademark rights.” Sen. Vitter makes valid trademark points. First, the NFL can’t prove ownership via first use because “Who Dat” was “first heard in New Orleans minstrel shows well over 130 years ago” and “St. Augustine High School in New Orleans” used it prior to the NFL. Second, there’s wide spread use by others and lack of enforcement because “Who Dat” “has become part of New Orleans and Louisiana popular culture.” Finally, as for fair use, Sen. Vitter challenges the NFL to sue him because he’s printing t-shirts with “WHO DAT say we Can’t print Who Dat!” for widespread sale in commerce.

The NFL has only now — apparently after Senators intervened — realized the public relations blunder, chalking it all up to a “significant misunderstanding as to the scope of the [League’s] trademark enforcement efforts.”