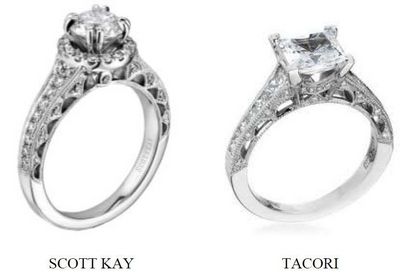 Tacori suffered another loss in its continuing copyright and trade dress infringement lawsuit against rival jewelry designer Scott Kay. The Court previously denied Tacori’s ex-parte application for a temporary restraining order, but that did not deter Tacori’s attempts to prevent Scott Kay’s sales of its Heaven’s Gate jewelry collection. Not surprisingly, the Court denied Tacori’s preliminary injunction bid, which was now focused solely on the copyright issue.

“A plaintiff seeking a preliminary injunction must establish that he is likely to succeed on the merits, that he is likely to suffer irreparable harm in the absence of preliminary relief, that the balance of equities tips in his favor, and that an injunction is in the public interest.” Winter v. Natural Res. Def. Council, 129 S. Ct. 365, 374 (2008). Although a plaintiff must make a showing on each factor, the Ninth Circuit employs a sliding scale approach where “a stronger showing of one element may offset a weaker showing of another.” Alliance for the Wild Rockies v. Cottrell, 632 F.3d 1127, 1131-35 (9th Cir. 2011). Thus, a preliminary injunction may still issue where there are “serious questions going to the merits and a balance of hardships that tips sharply towards the plaintiff . . . , so long as the plaintiff also shows that there is a likelihood of irreparable injury and that the injunction is in the public interest.” Id. at 1135 (internal quotation marks omitted).

The Court found that Tacori may be able to meet “its low burden of establishing copyright ownership” because the “requisite level of creativity is extremely low.” In order to show copying, Tacori had to establish Scott Kay’s access to its reverse crescent design and that the Heaven’s Gates rings were substantially similar. Scott Kay admitted that it was aware of Tacori’s design, but the Court found that the parties’ respective designs were not substantially similar.

In applying the extrinsic test, the court compared the two designs and found that neither the repeating reverse crescent design nor the diamond set in the triangular spaces between the openings is original. In addition, the Court found that Tacori “failed to provide competent expert testimony for this test” as its expert did not examine the parties’ rings. For the intrinsic test, the Court found it unlikely that the ordinary audience for these very expensive rings “would find Defendant’s rings so similar in total concept and feel to Plaintiff’s rings that they infringe Plaintiff’s copyrights.” Further, the Court that Tacori failed to establish irreparable harm “absent injunctive relief, that the balance of the equities tips in its favor, or that an injunction would be in the public’s interest.”