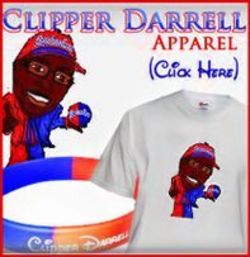 Clipper Darrell has been a fixture at Clippers’ basketball games for the last decade, even when the team was horrible and I would go watch them solely because my friend would give me his season tickets. In fact, Staples Center was so empty during Clippers games that Clipper Darrell was the only person cheering. But now that the Clippers are winning, my friend has stopped giving away his tickets and the Clippers have apparently told Clipper Darrell he can no longer use “Clipper” in his name or sell merchandise that allegedly infringes the “Clippers” trademark.

Although the Clippers will surely resort to the canned response of “we have a duty to enforce and protect our trademark or risk losing our trademark“, some trademark professors believe the risk to be overstated. But to Clipper Darrell’s advantage, when he and I were at past Clippers games, the only other “fan” in attendance was team owner Donald Sterling, who was actually and inexplicably heckling his own players. There is no doubt that Mr. Sterling saw and/or heard his counterpart, Clipper Darrell in his trademark half-blue/half-red suit, actually cheering for the Clippers. Thus, it appears that Clipper Darrell may have a laches defense against the Clippers’ trademark infringement claim if he can show that the Clippers knew or should have known of his infringing activity and they unreasonably delayed in filing a lawsuit. Miller v. Glenn Miller Prods., 454 F.3d 975, 980 (9th Cir. Cal. 2006).

The practical approach from both a legal and PR perspective would be to license Clipper Darrell to use the trademark and not alienate Clippers’ fans that have been loyal during the lean years. The trademark license would allow Mr. Sterling to increase revenue and thereby extend Blake Griffin the maximum contract allowed under the new collective bargaining agreement. But that assumes the Clippers are now practical.