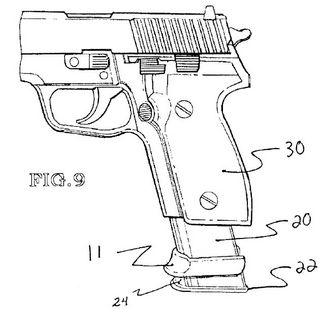 Freed Designs has filed a patent infringement lawsuit against gun manufacturer Sig Sauer alleging infringement of U.S. Patent No. 6,928,764, titled Grip Extender For Handgun. Freed Designs contends that Sig Sauer has infringed its patent by making and selling magazine extenders covered by one or more of the patent’s claims, including magazine extenders for Sig Sauer models P238, P938, and P290.

Freed Designs seeks unspecified monetary damages, but it contends that it is entitled to “damages adequate to compensate for this infringement in an amount no less than a reasonable royalty, together with interest and costs” as provided by 35 U.S.C. § 284. Plaintiff also seeks preliminary and permanent injunctions prohibiting Sig Sauer’s further infringement of the grip extender patent.