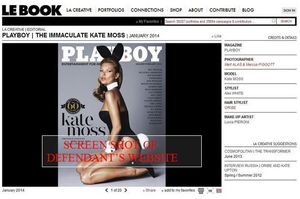 For its sixtieth anniversary issue, Playboy commissioned noted fashion photographers Marcus Pigott and Mert Atlas to photograph Kate Moss to grace its cover. The photos have received widespread critical acclaim and praise as instant classics, and Playboy sought to timely register the pictures with the U.S. Copyright Office.

[Le Book has] reproduced, distributed and publicly displayed high-resolution copies of the Playboy cover with Kate Moss and the entire 18 page-spread featuring the photos of Kate Moss in toto, including the entire text and interview with Kate Moss…The brazenness of the infringement is further magnified by the fact that the infringement appears to be the product of direct, high resolution reproduction/scanning of Playboy’s magazine, as even the page numbers therefrom appear in the infringing images…Defendants have not just willfully and directly infringed Playboy’s copyrights; they have also enabled and facilitated countless act of infringement by third parties.

In addition to seeking preliminary and permanent injunctions, Playboy seeks unspecified monetary damages and its attorneys’ fees and costs incurred in the lawsuit.