Los Angeles, CA – Trademark attorneys for Throttle Rocker, Inc. filed a trademark and trade dress infringement, counterfeiting, and Lanham Act § 43(a) unfair competition (15 U.S.C. § 1125) complaint at the Federal District Court in Los Angeles. Plaintiff manufactures motorcycle accessories, including a contoured throttle device which attaches to the throttle of a motorcycle and provides relief when the rider squeezes the throttle. Plaintiff has sold the devices under its Throttle Rocker trademark since 1995 and has registered a word mark and a logo with the U.S. Patent & Trademark Office. The complaint also asserts that the trade dress of the black device features “the following distinctive features: a velcro strap, an arcuate top portion and a concave-shaped base portion, which is approximately twice as wide as the top portion.” 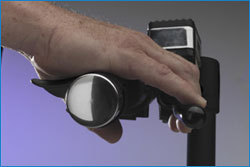 Defendant Eurodezigns, Inc. and several individual defendants are accused of selling a counterfeit product which allegedly uses the Throttle Rocker trademarks and infringes on Plaintiff’s trade dress. The complaint asserts that “Defendants’ use in commerce of THROTTLE ROCKER and its [sic.] sale of the counterfeit product, is likely to cause confusion, decpeiton and mistake in the minds of the public with respect to the source and origin of Plaintiff’s products.” The case is titled Throttle Rocker, Inc. v. Eurodezigns, Inc. et al., CV 08-07361 ODW (C.D. Cal. 2008).

PRACTICE NOTE: From the description of the alleged trade dress in the complaint and Plaintiff’s advertisement touting the comfort on the heal and palm of the hand imparted by the contoured shape of the device, it is going to be difficult to prove that the design is non-functional and entitled to trade dress protection.