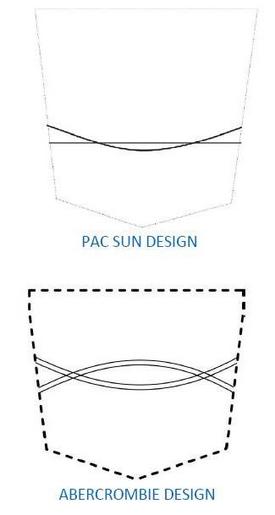 The complaint alleges that a “controversy has arisen and currently exists among Pac Sun and defendants regarding whether Pac Sun has infringed the alleged A&F Pocket Design, the Hollister Jean Names, and the font and stylization allegedly used by Hollister, and whether Pac Sun has engaged in unfair competition, under either federal or applicable state law.” Pac Sun seeks a declaration from the court that it does not infringe the Defendants’ trademarks because of the absence of likelihood of confusion and that the word marks are generic and/or descriptive and not enforceable. The case is titled Pacific Sunwear of California, Inc. v. Abercrombie & Fitch Trading Co. et al., CV08-06135 DDP (C.D. Cal. 2008).